So ya, right there in my back yard (Monteverde, Costa Rica) is a taco stand that I've been avoiding for three reasons: 1) it's in (our) tourist town of Monteverde, so it's bound to be a rip-off, 2) the name: "Taco-Taco Taqueria" is about the stupidest name ever for a taco stand, and 3) it's right next door to Pension Santa Elena, which has a front porch that is usually oozing with chain smoking fake hippies.

So, there we are in town for some reason (probably buying beer) and we're jones'n for some food. Let's see, what are our choices......hmmm, overpriced beans and rice or overpriced and shitty pizza or "hey, what about the taco stand?"

So there we are ordering up tacos at Taco-Taco Taqueria - (veggie burrito for Jen) from a tica woman that is super grumpy from selling tacos in a cloud of patchouli gas wafting from next door and the fact that she's serving up "Mexican" food (Costa Ricans don't seem to like Mexicans - or any other Latinos for some reason). It's a true "stand" - like, it's on the street with no chairs or anything, just the curb. Jen orders it up - massive veggie burrito unlike anything ever witnessed south of California. I'm impressed already. I'm up and get it on with one pork and one beef, the frikin' Taco-Taco Taqueria taco sampler platter. Not cheap, two micro tacos ran me 1,600 Colones, which is about 3 bucks. All of it served up "to-go" style, wrapped in foil.

So we take to goods over and sit on the back of our truck....and....."crunch", hey - they are actually not too bad. Now, bare with me, this is Costa Rica. Crazy thing is, most people from the "north country" think tacos are like a staple food in all of Latin America - no, senior unfortunately, that is not the case. Finding a taco in Costa Rica is like trying to find haggus in Japan - it ain't easy. Anyway, back to the tacos: they were wrapped up in flour torts which were just ok, store bought, gummy and cold - however the taco guts were actually ok. Good slow-cooked, stewed meat, good greens (lettuce, no cilantro....boooo), pico, queso Monterico (the local "jack" cheese) and a splash of habenero salsa. Not great but decent........about as good as one can make at home. 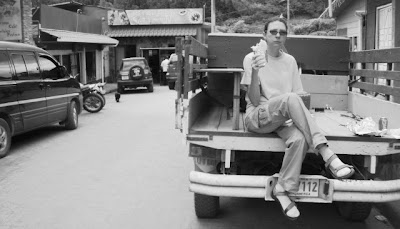 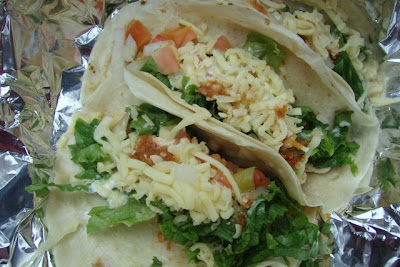 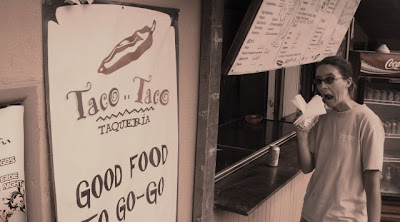 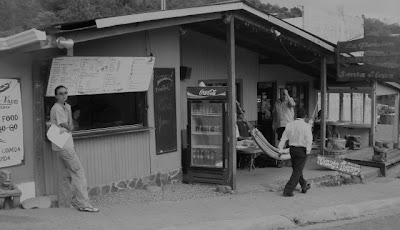 Posted by Pancho WonTon at 8:59 PM 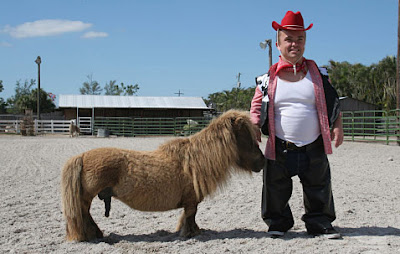 Da House is in Da House 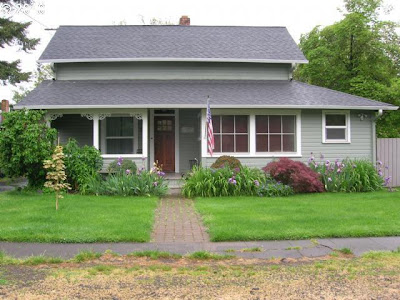 So ya, we just bought this house in Portland (actually a bit south) - an old 1910 farmhouse totally remodeled in the town of Hubbard. Yes, that's right ya'll....this is THE "Hubbard" .....home to the Hubbard Hop Festival and yes, there will be a beer or two drunken.

Our last day here in Costa Rica will be April 26th, when we close up on the deal on the monkey house.....assuming all goes as planned and the torch-wielding Junta don't drive us out before then. So, there you have it. Come visit!

Posted by Pancho WonTon at 7:02 PM 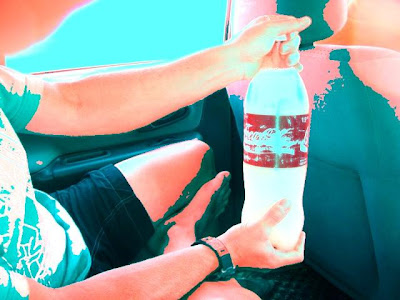 Crackin' the seal on 2 liters of "Vino de Coyol".....Bring on your witchcraft bitches!

From Wikipedia: "Coyol wine is a fermented alcoholic beverage made from the sap of Coyol Palms. It is primarily made and consumed in many countries in Central America. In order to produce the wine, the trees are cut down and the sap is left to ferment in the sun. The result is a cloudy, milky white alcoholic beverage. Coyol wine is most commonly produced and sold by private vendors at roadside stalls in used plastic bottles.
The wine is unique in that it causes inebriation not primarily by it's alcohol content, but through its enzymatic action triggered when one drinks it and then receives significant sun exposure. It is well known that one can become inebriated in the evening, regain sobriety by the next day and then undergo inebriation again in the moring without even consuming more, mearly by being exposed to the sun again."
So, in the part of Costa Rica where we live, you can see people along the roadside selling this stuff in all sorts of crazy (certainly unsanitized) bottles. Finally one day we bought some to see what it's all about. So, for about $1.50 we bought 2 liters of this stuff. First thing we noticed is how damn fizzy it was.........I mean it was like out-of-control fizzy. If you didn't vent the bottle at least every 10 hours, you're looking at a SERIOUS explosion of Coyol jizz. At first drink, it's actually not too bad - like carbonated apple juice mixed with skim milk and about 50 Alka-Seltzer tablets.
In an effort to REALLY get the full effect without ending up in the hospital, I drank about 1 liter of this stuff and then sat out in the direct sun for about an hour. The drinking part gave me a buzz right away....maybe as strong as beer or a little less. Sitting in the sun, I fully expected complete inialation with halucinations, violent vomiting and head-body detachment/spinning. Unfortunately (and thankfully) none of this happened. In fact, the sun exposure did not seem to enhance the effect at all - this is factoring in that, by this point, I had moved on to beer and was feeling that on top of the Coyol. The next day I went for a long ride in the sun to test the residual inebriation claims....and.......damn! nothing still! Maybe I need to shoot this shit up or rub it on my nipples - whatever it is, I'm not doing it right.
I think maybe another (more controlled/much higher volume) test is in order.....so stay tuned for that.

Posted by Pancho WonTon at 6:32 PM